If one day you awake to discover that your shoulder has, as Elsa sings in the movie Frozen, “crystallize[d] like an icy blast” and you just can’t “let it go” any longer, you might be experiencing adhesive capsulitis, more commonly known as frozen shoulder. What may have begun as annoying stiffness has now progressed into a joint that is literally hard to move.

Causes:  Despite its name, frozen shoulder is not brought on by cold weather. According to the American Academy of Orthopaedic Surgeons (AAOS), the shoulder capsule thickens, adhesions develop and there is a reduction in synovial fluid. It is not fully understood what causes this to occur, but risk factors appear to include diabetes, hypothyroidism, hyperthyroidism, Parkinson’s disease, cardiac disease, and limited use following a shoulder injury or surgery.

Frozen shoulder, although not rare, only affects about 2% of the general population. That comes as little consolation to those who do suffer from this debilitating condition. Interestingly, it affects more women than men and occurs most often in middle age (between the ages of 40-60).

Symptoms:  Pain in the outer shoulder and upper arm regions that gradually intensifies over the weeks and months is most often associated with the initial “freezing” stage. When the shoulder reaches the “frozen” stage, the pain lessens considerably but the tradeoff is that mobility becomes severely limited – to the point that performing routine tasks become extremely difficult.

It is important to be diagnosed by a physician to rule out a broken bone or arthritis, which cause similar symptoms. 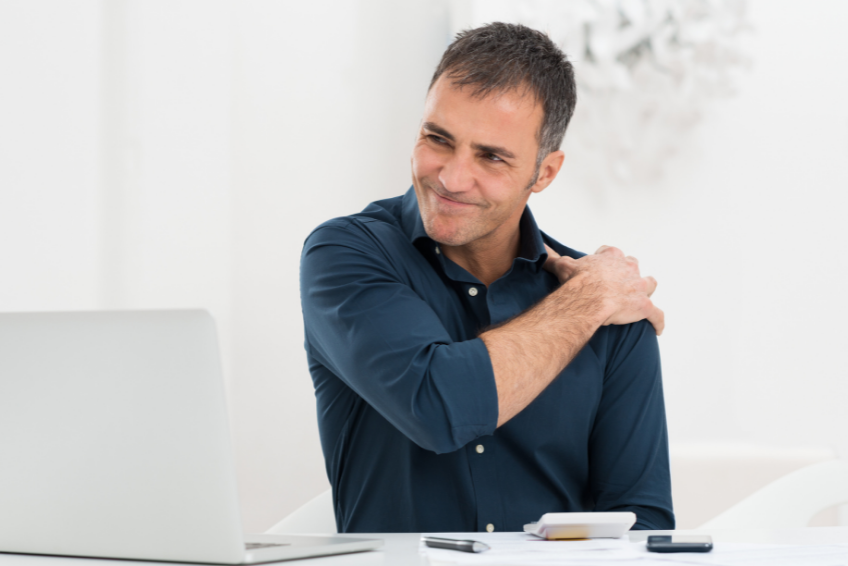 The good news is that unlike arthritis, frozen shoulder almost always goes away eventually – it’s just a matter of time (anywhere from 6 months to 3 years).

Treatments:  As you wait for frozen shoulder to run its course, there are several treatment options available to help reduce pain levels and stimulate mobility. Western medicine recommends one or more of the following:

Although these treatments often provide relief from frozen shoulder, they may not be appropriate or adequate for everyone. Individuals seeking more holistic and/or less invasive options may wish to consider acupuncture.

Sara Calabro, basing her findings on the discussion of trigger points for frozen shoulder that appear in Dr. Janet Travell’s Myofascial Pain and Dysfunction: The Trigger Point Manual, states that “[a]cupuncture can eliminate these trigger points, wiping out frozen shoulder for good and offering people an alternative to the common — yet usually only temporarily effective — protocol of pain killers, cortisone shots, and surgery”.

Lest you think that holistic practitioners are the only ones who believe in the ability of acupuncture to relieve the pain and stiffness of frozen shoulder, it is important to note that Western science is beginning to hint at its effectiveness as well.

Prevention:  According to WebMD, “Gentle, progressive range-of-motion exercises, stretching, and using your shoulder more may help prevent frozen shoulder after surgery or an injury” but they are quick to also point out that “[e]xperts don’t know what causes some cases of frozen shoulder, and it may not be possible to prevent these.”

Schedule a Consultation:  If you’re tired of soreness and stiffness and are ready to see how acupuncture for frozen shoulder pain can make a difference, call Acupuncture Associates in Wilmington, North Carolina to schedule an initial consultation.

Whether you live in Sneads Ferry, Southport, Wrightsville Beach, or anywhere in between, Robert will work with you to determine a custom treatment plan and a convenient schedule.

Get all of our website articles delivered directly to your inbox. Be one of the first to learn about Chinese herbs, healthy living tips, and specials. Sign up today.

Robert has over 40 years of experience treating and healing with traditional Chinese medicine. If you're experiencing pain and are in need of relief, schedule your appointment now. Robert will listen to your story, identify problem areas, and construct a treatment plan that will help you find relief.